Chulu West peak (6419 m) is located north – east of the Annapurna ranges in Manang valley. It was first ascended in 1953 by a Japanese Expedition. The Base Camp of Chulu peak is situated in a small valley north of Manang, off the main trail to the Thorong La Pass. There is a controversy regarding the name and location of the Chulu peak.

There are several peaks close by and are also a part of Chulu massif but are not indicated in the map. Thus, it is difficult to differentiate between the two Chulus. However, the Chulu comprise four peaks: two in the east and two in the west. East side Chuli east and Far East which is a climbing route from Nawal and west side Chulu West and Chulu Central.

Chulu west peak climbing offers beautiful Himalayan views of Annapurna region. There is no real technical difficulty in reaching the summit, but progress can be slow depending on snow conditions. Above base camp, some steep, loose rock requires some fixing of ropes. The long way from the mountain terrace to the top is required to fix Camp 1.

Chulu west peak climbing itinerary from Beshi Sahar after a 5-6 hour drive from Kathmandu. Asian Hiking Team led through the beautiful valley Jagat Tal Dharapani Chame, Pisang and finally reached Manang. Manang valley, one of the beautiful valleys situated at an altitude of 3541m. One-day rest will be set to explore the Manang for the acclimatization. From the Manang the route heads north to Ledar and on to the Chulu West Base camp. From base camp climb to Camp 1 which we need to fix rope. From Camp 1 early morning, start climbing Chulu west and return to base camp. Finally, we return to Ledar. Our itinerary mentions you over Thorong La pass to end your trek in Jomsom. If you have a short time, you can return the same way to Kathmandu.

The Asian Hiking Team operates Chulu west peak climbing as your interest, budget and time frame. During the trekking until Ledar it is possible to have Guest house/Lodge facilities. In the guest house / Lodge was running hot and cold water facilities. Private rooms are available in most guest houses/ Lodge. Most bathrooms are shared. Many years’ experience of Trekking field of organizing various treks in Nepal assures you that we have chosen for our treks the cleanest and most hygienically kept Guest Houses /Lodge with a friendly atmosphere and the best views. From Ledar to base camp we need to full board camping three nights. Camping is fully organized and supported, with a team of guides, cooks, Sherpas and porters to accompany you. Our porters carry all the trekking gear, food, fuel and personal belongings. Our cooks prepare hot meals. At night, tents for dining, sleeping and ablutions tents are provided and set up, mattresses and down-filled sleeping bags, tables and seating. Trekkers enjoy breakfast before leaving camp.

Arrival at Kathmandu; transfer to the Hotel, overnight at Hotel.

Acclimatization at Manang, Explore the Lake or Cave as you want overnight at Guest house.

Day 9: Trek to Chulu base camp

Trek to Chulu base camp 4900m, overnight at Camp.

Summit Chulu West (6,419-meter) and return back to base camp or high Camp, overnight at at Camp.

In case of weather or any problem, we can use that day.

Fly back to Pokhara from Jomsom, or drive to Pokhara by Bus/Jeep, overnight at Guest house.

Pokhara to Kathmandu by tourist.

Drop to Airport as your own programs.

In April 2017, I traveled in Nepal and Tibet with Asian Hiking Team. Asian Hiking Team was our local peak climbing operator, headed up by Suman and his incredibly capable group of interpreters, guides, Sherpa and drivers. That the accommodations and restaurants were first rate - beyond anything I anticipated - was just part of what made the experience so wonderful.
Everyone involved was incredibly knowledgeable, kind, professional yet personable, warm and welcoming, all of which created an atmosphere for our travels that enhanced our experience in these wonderful lands. It was very long day to push summit from high camp but we fix Camp 1 so that it is fine. We start 1am and we reached summit at 7am then return to high camp 5pm.
I would definitely recommend Asian Hiking Team. I had a great time and not only enjoyed their company but appreciated their knowledge about the mountains and culture.
Hannah Kelly 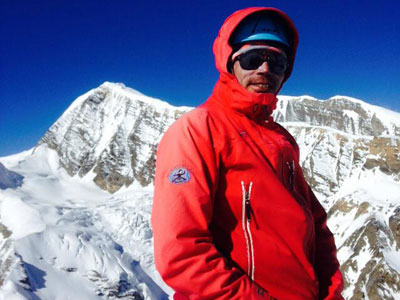