Kanchenjunga lies between Nepal and Sikkim, India, with three of the five peaks (Main, Central, and South) directly on the border, and the remaining two (West and Kangbachen) in Nepal's Taplejung District of Province No. 1.

Kanchenjunga is the third highest mountain in the world. It rises with an elevation of 8,586 m (28,169 ft) in a section of the Himalayas.

Kanchenjunga was first climbed on 25 May 1955 by Joe Brown and George Band, who were part of the 1955 British Kanchenjunga expedition.

The main ridge of the massif runs from north-northeast to south-southwest and forms a watershed to several rivers. Together with ridges running roughly from east to west they form a giant cross. These ridges contain a host of peaks between 6,000 and 8,586 m (19,685 and 28,169 ft). The northern section includes Yalung Kang, Kangchenjunga Central and South, Kangbachen, Kirat Chuli, and Gimmigela Chuli, and runs up to the Jongsang La. The eastern ridge in Sikkim includes Siniolchu. The southern section runs along the Nepal-Sikkim border and includes Kabru I to III. This ridge extends southwards to the Singalila Ridge. The western ridge culminates in the Kumbhakarna, also known as Jannu.

There are four climbing routes to reach the summit of Kanchenjunga, three of which are in Nepal from the southwest, northwest, and northeast, and one from northeastern Sikkim in India. To date, the northeastern route from Sikkim has been successfully used only three times. The Indian government has banned expeditions to Kanchenjunga; therefore, this route has been closed since 2000.

Arrival in Kathmandu and transfer to hotel.

Climbing Preparation days in Kathmandu and official briefing by Department of Tourism.

Fly to Bhadrapur and drive to Phidim, stay overnight at the hotel.

Acclimatization rest day in Yamphudin, visit the village and explore around.

Trek from base camp to Ramche, stay overnight lodge.

Fly to Bhadrapur to Kathmandu, overnight in a hotel. 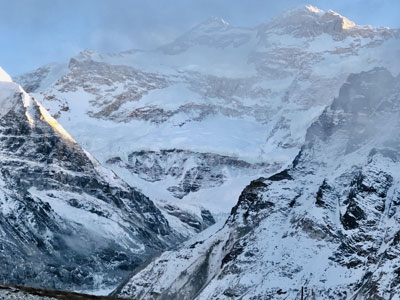