Ama Dablam (6856m) is one of the most famous and beautiful peaks in the world, rising above the Dudh Kosi River valley on the way to Everest Base Camp. Ama Dablam South - West ridge is the normal and most popular route to ascend. First ascent by Ward (UK), Bishop (USA) and Gill (NZ) in 1961.

Ama Dablam is considered to be the most technical & complicated to climb. The mountaineers have to cross-difficult ice rocks and vertical snow climbing on their climbing path. Mountaineers usually have to pitch 3 high camps on the mass of mount Ama Dablam 6856m.

To reach the first camp from base camp, the climbers have to pass the toughest and the difficult passing through the difficult saddle ridges; and then should spin to the north climbing up through the rocky land and through the boulder. From Camp I - one has to cross the rocky sink and should climb the ridge via to the fixed lines to Camp II. From Camp II after crossing over severe rocks and ridge which lead you to a camp II. The Ama Dablam climbing route from Camp II is mostly steep mixed alleyways of rock, ice and snow. The route leads to the slope, climbs to snow ground and then passes through steep snow and ice channels, then finally along the snow ridge go to Camp III. From Camp III to the summit, it is a steep climb on snow and ice to the right of a huge hanging glacier. After scaling the summit, we return back to base camp.

From the Top of mount Ama Dablam very charming senescence of Mount Everest, Lhotse, Nuptse, Cho Yu, Island peak, Makalu, Khumbu Himalayan and the rest of the snow capped surrounded mountains can be envisioned. After scaling the summit, we return back to base camp, continue trekking to Lukla and fly back to Kathmandu.

Arrival in Kathmandu airport, meet our staff then transfer to Hotel (B).

Kathmandu free day and Official works for expedition and briefing by officer of Ministry of Tourism, Overnight Hotel (BB).

Fly back to Kathmandu, transfer to Hotel, Overnight Hotel (BB).

Depart from Kathmandu (B).

Amadablam Expedition 2018 You, and all of the personnel at Asian Hiking Team, have been wonderful to deal with. You are all easy to reach and very responsible to my request for information and assistance. I never have mess reaching Asian Hiking Team or obtaining prompt answers, which is very important given my residence in the United States. Your contact with climbing associations and local government agencies that regulate and permit treks and climbs has been a big factor in making my expeditions so acceptable and enjoyable. Keep up the good work. See you in 2020 Jessica Uillani/ Michal Srebro USA 2012 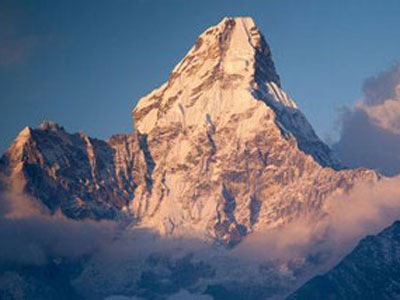