On Request / Per person

The first climb of Lhotse was on May 18, 1956, by the Swiss team of Ernst Reiss and Fritz Luchsinger from the Swiss Mount Everest/Lhotse Expedition. Lhotse was not summit in 2014, 2015, or 2016 due to a series of incidents, however, it was submitted again in May 2017.

The route developments through Khumbu icefall. Moving further, we will reach Camp 1 that exists at the top of Khumbu icefall that is bordered by crevasses. From Camp 1, we will pass through lateral moraine to the west ridge that greets us with a close-up view of Lhotse. This place is perfect for Camp2. Leaving Camp2, we will reach near to Lhotse wall by crossing glacier and ice cliffs where we will set Camp3. Camp 4 is located near to South Col. From Camp 4, we will proceed through steep rock sections to the summit.

Day 02: Preparation for Expedition, Overnight Hotel; if you want to visit historical place in Kathmandu let us know. Or you can final shopping or check equipment. Day 03: Kathmandu Official briefing: Official works for expedition and briefing by officer of Ministry of Tourism, overnight Hotel.

Kathmandu to Lukla by flight and trek to Phakding 3.30 hours, overnight Hotel/Guest house.

Rest day for acclimatization and explore around, overnight Hotel/Guest house.

Lobuje to Base Camp, 5 to 6 hours trekking, overnight tented Camping.

Namche Bazaar to Lukla 6 hours trekking and transfer to hotel.

Early morning 30 minutes flight back to Kathmandu then transfer to Hotel.

Last minute, transfer to the airport for your onward journey.

Great company for an amazing Expedition!

Great organization with Suman, the office manager. Very responsive to inquiry, and very professional. Our guide was supportive, full of information, fun to hang out with and always had our safety and best interests in mind.
I found Ngima Tenji Sherpa and his team to be timely, honest, engaging, supportive and present. The food at EBC (Everest Base amp) was outstanding and the infrastructure support to be wonderful. We all had our own ‘two man’ tents in EBC! Now, that being said it would have been nice to have sit down toilets at base camp. He fully support me to push the summit. I used 4 bottle of oxygen. It was really difficult but forget my pain after I was on top.
I would go back with them in a heartbeat! I recommend them to other experienced climbers attempting Everest.
Olivier Drouin 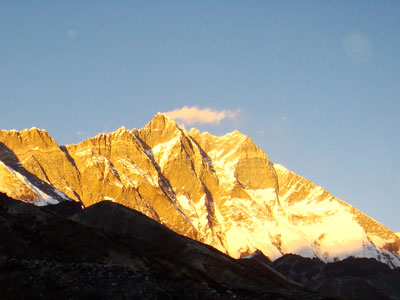